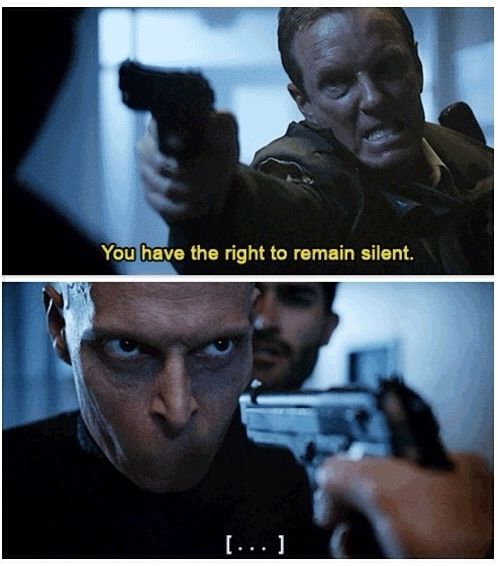 You must have heard the above dialogue in countless Hollywood flicks. The cops rattle out these words when they arrest someone. Next time you watch a thriller like this one-Pay Close Attention!

For Once- the movies got it right.

This is called the MIRANDA WARNING and is a mandatory procedure as per the U.S. Constitution, at the stage of arrest.

Miranda vs. Arizona in 1966 was a landmark judgment of the Supreme Court of U.S.A which upheld the Right of a person arrested to Remain Silent when questioned by the Police or similar agencies and protect oneself from being incriminated.

Harvey Specter says it in his own suave style-all macho.

IN THE LANGUAGE OF LAW-IT MEANS: THE RIGHT TO REMAIN SILENT AND PROTECTION FROM SELF INCRIMINATION

Both the Indian Constitution and that of U.S.A ( many more too… but those we usually don’t talk much about) allow the Fundamental Right to Remain Silent to Protect from being incriminated in law.

Under Indian law, the principle has been given Constitutional status by incorporating it under Article 20(3) of the Constitution. It says:
“ No person accused of any offence shall be compelled to be a witness against himself.”
This is in addition to the several other rights available to an individual at the stage of arrest.
WHO IS AN ACCUSED PERSON? IS A SUSPECT ALSO COVERED UNDER THIS FREEDOM?
When a person is interrogated and during interrogation, he perceives that he is being suspected for the commission of some offence or when he is treated as an accused or suspect by the interrogating agency, he should have the liberty to claim the privilege granted to him under Article 20(3) of the Constitution.
SOURCE OF THIS RIGHT? IF YOU MAY?
The Fundamental Right against Self Incrimination relates to the Fifth Amendment of the United States, which says:

“No person shall be compelled in any Criminal Case, to be a Witness against Himself”

WHAT IS THE LOGICAL BASIS OF THIS RIGHT?
The right to silence has various facets.
One is that the burden is on the State or rather the prosecution to prove that the accused is guilty.
Second is that an accused is presumed to be innocent until he is proved to be guilty.
The third is the right of the accused against self-incrimination, namely, the right to be silent and that he cannot be compelled to incriminate himself.
ANY EXCEPTIONS?
Yes, there are also exceptions to the rule. An accused can be compelled to submit to an investigation by allowing his photographs taken, voice recorded, his blood sample tested, his hair or other bodily material used for DNA testing etc.
CONCLUSION
Though this right prima-facie raises eyebrows, both from its supporters and opposers, yet it is a crucial right to protect the Citizen from the might of the State and therefore in their wisdom, the Founding Fathers placed it in the much-cherished Part 3 of the Constitution among the Fundamental Rights.
I hope you like and have found Right To Remain Silent useful
Please share with friends and relatives. You never know who could be benefitted by this information.
Kindness costs nothing.

DISCLAIMER: Through this article, we wish to help those who are in genuine need of help and are willing to understand the law. This is not a solicitation, advertisement or a substitute of professional legal advice. It does not create any client-attorney relationship.